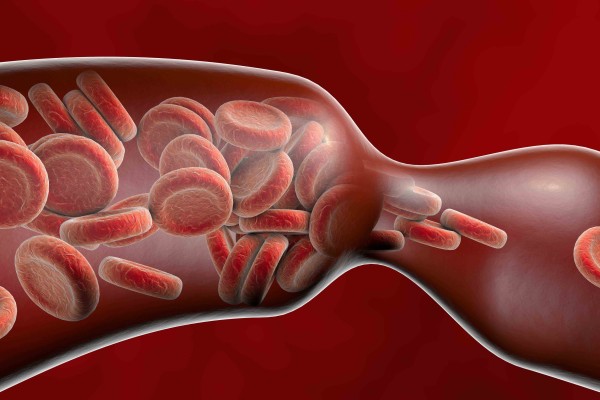 Phenylephrine-induced recruitable preload from the venous side

How to limit fluid overload?

1 Shock is not always hypovolemia

During the perioperative period, patients often suffer from hemodynamic instability, especially after major abdominal surgery, due to several pathophysiological processes: anesthetics, hypovolemia, surgical procedure, mechanical ventilation, cardiac co-morbidities and patient positioning [1]. Over the last decades we have used aggressive fluid resuscitation as a cornerstone in the treatment of shock, however, with only little evidence to support this [2, 3, 4]. Much of our current traditions of fluid resuscitation comes from experience in treating the blue stage of spasmodic cholera, where giving large amounts of aqueous and saline injections saved lives [5]. Ever since, it is deeply incorporated in our culture that shock must always equal hypovolemia. Fluid administration to maintain or restore circulation hence became an integrated part in the care for patients undergoing surgery, but also in critically ill patients admitted to the ICU.

However, avoiding hypervolemia is mandatory (especially in situations of capillary leak and global increased permeability syndrome), since excessive fluid administration usually leads to edema, increased inflammation and permeability and compromised tissue healing [6, 7, 8, 9]. To avoid excessive fluid administration leading to edema and fluid overload, while maintaining an adequate mean arterial pressure (MAP), vasopressors may be required. It has to be noted that the term fluid overload has recently been questioned and hyperhydration or intravascular versus extravascular hypervolemia may be more adequate terms [9].

More than 70% of total blood volume (TBV) is located in the large veins, and increased vascular compliance (vasoplegia) like in sepsis or induced by anesthesia, can cause a substantial increase in TBV (with up to 80%) [10]. This increased venous compliance and increased TBV in early sepsis may represent a recruitable source of preload, as veins are very sensitive to low doses of vasopressor [11, 12]. These drugs directly convert unstressed blood volume to stressed blood volume while maintaining nearly normal venous elastance [11] (Fig. 1). Phenylephrine is widely used to treat intraoperative hypotension (via arterial and venous constriction). As a direct α-adrenergic receptor agonist, phenylephrine predominantly increases the systemic vascular resistance (SVR), systolic arterial pressure, MAP and left ventricular afterload, however its effects on cardiac output (CO) remain controversial [13]. The impact of phenylephrine on CO seems to be associated to preload dependency, where it generates most often an increase in CO through increased venous return. However, when the heart is preload independent, phenylephrine generally induces a decrease in CO, due to the increase in afterload [14, 15, 16]. 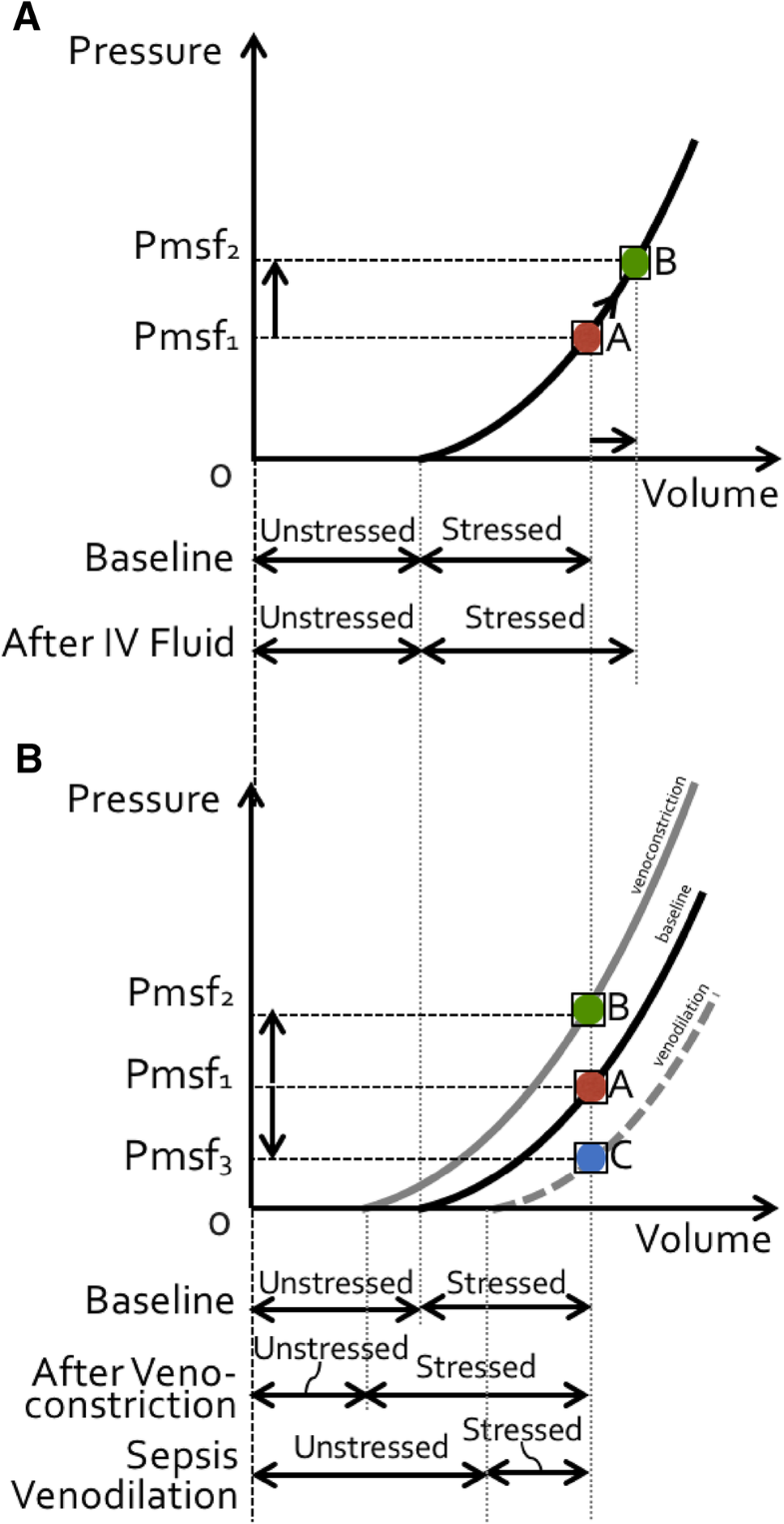 Within this perspective, the recent publication by Wodack et al. elegantly described the effects of continuous administration of phenylephrine on the main determinants of CO [17]. The application of phenylephrine resulted in a significant increase in the volumetric preload variable global end-diastolic volume (GEDV), but not on the pressure-based preload variables central venous pressure (CVP) and an analog of mean systemic filling pressure (Pmsf). This effect is contributed to the effect of recruiting venous return from the venous capacitance pool, which then becomes available for the heart to generate stroke volume [18, 19]. This effect on preload volume was only observed after the first application of phenylephrine. However, a further increase in CO and cardiac contractility was observed, attributed to the positive inotropic effect of phenylephrine at higher dosages.

3 All that glitters is not gold

Despite the interesting results, some methodological weaknesses should be considered.

Pmsf is the blood pressure throughout the vascular system at zero flow and offers information on vascular compliance, volume responsiveness and it allows the calculation of (un)stressed volume. For determination of mean circulatory filling pressure two other bedside methods are available, either based on inspiratory hold-derived venous return curves (Pmsf hold), or on arterial and venous pressure equilibration (Pmsf arm) [27].
Pmsf hold is based on the linear relation between CVP and venous return (VR):
𝑉R=(𝑃𝑚𝑠𝑓−𝐶𝑉𝑃)/𝑅𝑉𝑅
where RVR is the resistance to VR. Hereby, the CVP is raised by performing a series of end-inspiratory hold maneuvers and CO is measured in the last three seconds of the 12 s inspiratory hold. After 7–10 s a steady state occurs when VR = CO. By plotting the CVP and CO values, a VR curve is constructed and the zero-flow pressure (Pmsf) extrapolated [28, 29].

As Pmsf is defined as the steady-state blood pressure during no-flow conditions, the arm is used to estimate Pmsf arm. The upper arm is occluded to 50 mmHg above systolic blood pressure, using a rapid cuff inflator or a pneumatic tourniquet. Measurements of arterial and venous pressures through a radial artery catheter and a peripheral venous cannula in the forearm are performed. When these two pressures equalize, Pmsf arm values are obtained [28, 29].

Most of the circulating TBV is located in the venous part, containing as stated previously approximately 70% of the body’s blood volume. Venous vascular beds consist of unstressed (70%) and stressed (30%) volume. Stressed volume represents blood volume in excess of the unstressed volume, and its volume in relation to venous motor tone defines the Pmsf [10].

Under normal conditions, the body’s ability to rapidly vary unstressed volume is the primary means by which it alters venous return in response to changing metabolic demands [30].

The venous system contains α(1)-adrenergic receptors, and trough stimulation by phenylephrine the splanchnic capacitance vessels constrict [13]. However, phenylephrine also increases the venous resistance draining this region and the net effect on venous return is determined by how much volume is recruited versus how much the downstream resistance increased [13, 30].

In conclusion, the large animal study performed by Wodack et al. on phenylephrine to treat perioperative hypotension is promising, since it does not only affect cardiac afterload, but also increases preload by shifting blood from the venous capacitance. This effect was confirmed by the observed increase in GEDV. Early application of vasopressors has the potential to reduce intravascular volume deficit by recruiting blood from the venous compartment (auto-transfusion effect), as well as to avoid the detrimental effects of fluid overload. Further studies are needed are to evaluate how these changes in management may affect outcomes.

MLNGM is Professor of Medicine at the Vrije Universiteit Brussel (VUB) and ICU Director at the University Hospital in Brussels (UZB), Belgium. He is founding President of WSACS (The Abdominal Compartment Society, http://www.wsacs.org) and current Treasurer, he is also member of the Medical Advisory Board of Getinge (formerly Pulsion Medical Systems) and Serenno Medical, and consults for ConvaTec, Acelity, Spiegelberg, and Holtech Medical. He is co-founder of the International Fluid Academy (IFA). The IFA is integrated within the not-for-profit charitable organization iMERiT, International Medical Education and Research Initiative, under Belgian law. The IFA website (http://www.fluidacademy.org) is now an official SMACC affiliated site (Social Media and Critical Care) and its content is based on the philosophy of FOAM (Free Open Access Medical education—#FOAMed). The site recently received the HONcode quality label for medical education (https://www.healthonnet.org/HONcode/Conduct.html?HONConduct519739). The other authors have no potential conflicts of interest in relation to the contents of this paper.

Open Access
This article is distributed under the terms of the Creative Commons Attribution 4.0 International License (http://creativecommons.org/licenses/by/4.0/), which permits unrestricted use, distribution, and reproduction in any medium, provided you give appropriate credit to the original author(s) and the source, provide a link to the Creative Commons license, and indicate if changes were made.